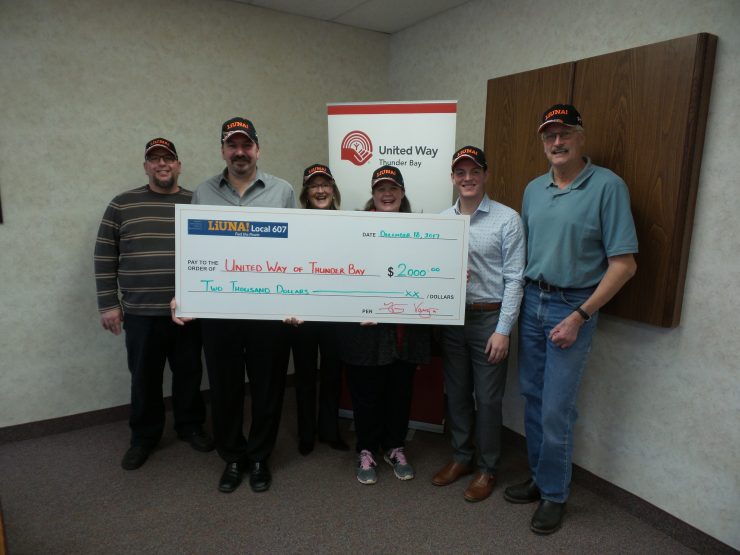 United Way of Thunder Bay is leading the way to a better community by improving the quality of life for all local people. By collaborating with community partners, we are leading the way to addressing social issues in our community and investing in three critical areas: Poverty, Kids and Strong Communities. Donations to the United Way are strategically invested across Thunder Bay to many vital programs and initiatives in these areas, creating a social safety net that works to achieve lasting change for our neighbours, families and friends.

Creating A Community Where Diversity Is Valued

Racism and discrimination in Thunder Bay are important problems that have received national attention; the United Way of Thunder Bay’s (UWTB) Community Report on Racism and Discriminationcalls public attention to the issue.  Random telephone interviews conducted with 500 people, and an identical online survey completed by 1141 individuals, resulted in a total of 1641 respondents. The need to carry out a survey on this topic came from the work the UWTB carried out through Thunder Bay Counts and the development of a report called the Shared Agenda for Change for Thunder Bay. The Shared Agenda highlights racism and discrimination as issues to which Thunder Bay needs to respond to in a collective and systematic manner.

The Community Report on Racism and Discrimination seeks to draw attention and to promote the tracking of performance-related data in order to measure progress in the future. The goal is to see the reduction of racism and discrimination in future years by developing remedies in areas of identified need. In order to measure progress over time, and to know whether the work the community is carrying out to reduce racism and discrimination is helping, a baseline of data is needed.  This report provides that baseline and is a snapshot in time.

Based on the survey results:

The report, which was released on January 25, 2018, and is now available to the public via www.uwaytbay.ca, will help generate needed conversations and can be used as a tool for knowledge building, planning purposes and the facilitation of discussions and collaboration among various groups in order to build a better community by reducing racism and discrimination, and promoting diversity.

The report clearly presents the groups that are being subjected to this type of discriminatory experience, the contexts and situations where it occurs, and reasons why it occurs.  Some of the major places where discrimination occurs are on the street, in stores, in banks, at restaurants, at school, or at work. The factors that are used as a basis for discrimination include race or skin colour, ethnicity or culture, gender, and language or accent. Even though the majority of people in Thunder Bay are concerned about racism and discrimination, less people are comfortable challenging it.

Groups that were most likely to be the targets of racism or discrimination as mentioned by the vast majority are:

The report, however, points out that the majority of Thunder Bay citizens have strong inclusive values. When asked if they would feel comfortable having a doctor, teacher of their children, or partner to a close friend/relative from a different racial group, LGBT community or person with a disability, overwhelmingly (96% per) said “yes they are comfortable.”

There is much good work occurring in Thunder Bay in efforts to promote diversity and build awareness around and reduce racism and discrimination, including but not limited to:

UWTB is pleased to work with our community and be part of the efforts to reduce racism and discrimination in Thunder Bay. Several years ago UWTB established the Nishwaaswi Committee to help build a better working relationship with the Indigenous community and this work is now part of the UWTB strategic plan.  Nishwaaswi translated means eight.  Nishwaaswi refers to the “The Eighth Fire,” a time when the different colours and traditions of all people come together on a basis of respect. This is a teaching from the Anishinaabe prophecy of the Seven Fires.

This committee name is very fitting in respect to the challenges we are experiencing in regards to racism and discrimination here in our community.  In order to build a better community we all need to work together. As part of these efforts, UWTB is facilitating a project called Diversity Counts which is funded through the Inspirit Foundation. The overall work of the project includes:

UWTB thanks the Inspirit Foundation for recognizing the need in our community and for seeing the potential for positive change.  Thunder Bay has many people and organizations who would like to work towards a better life for all those who live in our community. UWTB looks forward to continuing this important work with the community and to build on the existing good work already taking place.